A 35-year-old gang leader, Ehuiwe Akire, who specialised in trailing bank customers and dispossessing them of their money, has confessed that charms recovered from him made him invisible to security agents. Akire said that he started his life of crime as a local, and then slowly moved on to become leader of a gang of bank robbers.

Akire was arrested by operatives of the Inspector General of Police Special Intelligence Response Team (IRT) in Lagos State, headed by a Chief Superintendent of Police (CSP) Philip Rieninwa. The police explained that the Akire is the leader of a six-man gang of robbers. The gang was formed in prison.

The police said: “The gang specialised in robbing customers who go to banks to withdraw huge amount of money. The gang used to snatch cash, handbags and phones. The gang also robbed passengers on highways.

Most of these passengers were those returning from long distant journeys.” Our reporter gathered that Akire grew up in Ajegunle area of Lagos State. It was in that community that he took to crime like duck to water.

He and his gang members were alleged to have been among suspected criminals terrorising Apapa, FESTAC, Mushin and Surulere areas in Lagos State. The suspect said: “We used to rob customers at beer parlors and people who go to cybercafés to do transactions.” Akire, who operated with two Beretta pistols, said that he had never killed.

“We only carry guns to intimidate people and make them to know that we meant business. We want them to quickly cooperate and comply with our instructions,” said Akire. According to the police, Akire was arrested on January 16, 2020, along Isheri-Igando Road when he and his gang members went on operation about 4:30pm. It was on that operation that Akire was arrested, while five of his gang members escaped. The gang was busted at Isheri- Igando Road. The thieves were on three operational motorcycles and alleged to have engaged the policemen in a shootout, but were overpowered.

The police recovered two pistols and charms from them. The police disclosed that Akire and his gang members had been on Police Wanted List for long and were declared wanted for robbery. Akire, who said that he has one daughter, stated that he was separated from his wife. He said that his wife left him after she found out that he was, “a common thief.”

He said: “I stopped my education at primary six. I was a bricklayer, but I was not making enough money. When all efforts I made to get money to stand on my own failed, I took to stealing. At times, when shop owners are sleeping, I’ll sneak into their shops and steal handsets, money from drawers and other things of value. I was making big money, but I couldn’t save. I became a womanizer and started taking women to hotels. I lived a reckless life.”

The gang leader explained that the separation from his wife made him to dive further into crime, with a strong determination to make it big in life. He said: “The opportunity to make it big came when I was arrested by policemen from Adeniji Adele Police Station. I was arrested and charged to court.

It was in prison that hardened inmates taught me how to rob in order to make big money.” Akire recalled that there was a time he was also arrested by operatives of the Special Anti-Robbery Squad (SARS). He was also sent to prison.

His words: “It was in prison that I met an inmate named Festus. He initiated me into the world of robbery. Let me tell you the truth; it was after I dabbled into cultism that I became hardened. I joined the Eiye Confraternity. I bought two guns for the cult group and later bought one for myself.

It was cultism that gave my guts to carry guns around and go for operations. He saId: “We’re a six-man gang of armed robbers. We operate in Apapa, FESTAC, Mushin and Surulere. If we want to rob carry out robbery in banks, our member, Festus, would pose as a bank customer who wants to make a withdrawal. He’ll enter the banking hall and start to monitor the people who came to withdraw huge sums of money.”

He further explained that while Festus was inside the banking hall, checking out prospective victims, other members would be outside waiting for his signal. “Once the target had withdrawn money and came out, Festus would follow closely.

The moment the victim was out of the bank, Festus would signal the gang members outside by cleverly pointing at the victim,” said Akire. The suspect continued with his narration: “When the victim boards a taxi or commercial motorcycle, our members outside the bank, who are already on their motorcycles, would start trailing him until they get to the point where they would accost the victim and collect the money from him.” He recalled that his first victim was a woman.

“It was Festus that brought the girl as a target. He knew her very well. We robbed her,” stated Akire. Akire also explained that sometimes a gang member could be forced to team up with other gangs for operations, stating that he operated with three gangs.

He said: “I like holding two pistols just to play the big boy. Even when we go out for highway operations, I don’t use the guns on human beings. Rather I use the butts of the guns to hit the body of a car of a victim, just to put fear into them. Such moves used to make robbery operations easy.

When there are no robbery operations, I steal just to raise little money to keep body and soul together.” Akire said that whenever police arrested any of their members, others would flee and go underground until the dust settled.

He said: “We would go into hiding because we knew that police would want to use the arrested gang member to catch fleeing members.” He said that even as they were on the run they would sometimes run to other states for refuge. In those states, they might locate old gang members and team up with them for operations. “If one runs to another state and meets his old members, we would reunite and plan to work together.

That is easier since we had worked together before and understand ourselves rather than working with total strangers,” said Akire. He also said: “When I started robbery, gang leaders would relegate me since I didn’t have a gun. Possession of a gun finally placed me in a higher class. I became respected and an authority.” Speaking about the charms that police recovered from him, Akire claimed that they used to make him invisible. He recounted: “Before I went fully into armed robbery, I was a smuggler.

I used to carry contraband goods into Nigeria. Whenever I used the charm, customs officers wouldn’t be able to see me. The same applied to the police; they wouldn’t see me, let alone arrest me. I’ve vowed to God that if I regain my freedom, I would never take anything that belongs to my fellow human beings by force anymore. I will not rob again. I have not been able to save any money from robbery. My lifestyle doesn’t allow me to save. I sleep in hotels, stay in beer parlors and carry prostitutes.

I pay for hotel accommodation daily, drink beer and smoke marijuana. “At times, we used to go to other states to operate when security in Lagos was too tight. We used to go to Republic of Benin to rob. Sometimes we escape there to hide. 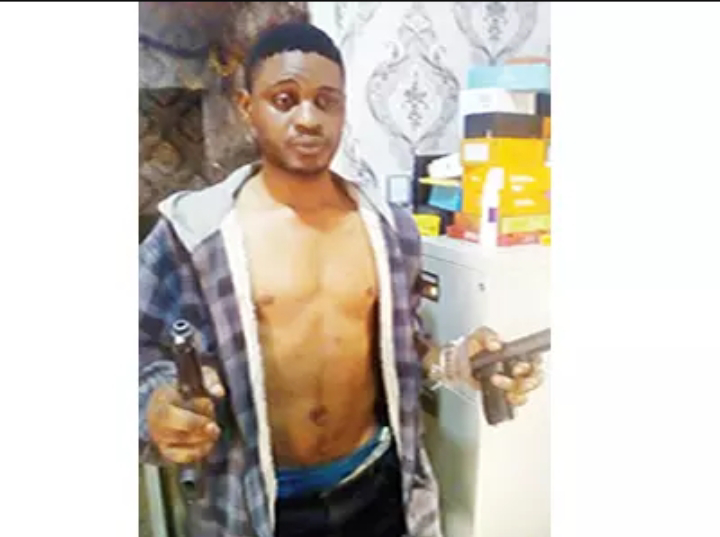 Email ThisBlogThis!Share to TwitterShare to FacebookShare to Pinterest
Tags News