David and preuzzi drug my drink and try to kill me, the way he killed his friends 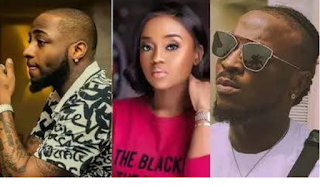 Peruzzi's former boss, King Patrick went to Hiptv to expose Davido for the fraud he is, claiming the five star artist tried to kill him the way he killed his three friends Tagbo, Dj Olu and Chime two years ago.
Patrick also said he would expose Davido secrets he said the first one is that most of his songs are owned by Peruzzi and he is owing him #45 million royalties fee.
He also said Chioma and Peruzzi are not cousins but in relationship with each other and drop her off as her cousin to Davido in order to gain more favour.
King Patrick also said Davido and his crew came all the way to Abuja to beg him but he won't accept his plead he want his money or else more secrets would be exposed.
Author: Chumax at January 25, 2020